Leadership That Comes Through the Power of Surrender 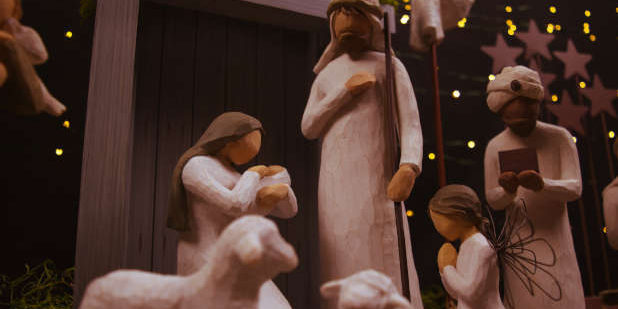 Everyone who has a problem with surrender, lift your hand.

Did your hand go up? Well, let me be the first to raise mine.

Most people hate to surrender, whether they realize it or not.

Leadership and surrender seem to be a contradiction in terms. We see submission as the first step to losing, not winning.

Yet, the Christmas truth is all of life is born through the power of surrender.

Come closer and see the baby born in the manger.

The story pulls us into the hopes and struggles of a young teenage girl. It reveals the battlefield mind of an older man engaged to this young lady.

There were searchers for truth, wisdom and leadership in wise men (the Magi) on that holy night. There was a family connected during the pregnancy. Shepherds who represent everybody proclaimed, “Joy to the world.” An innkeeper put the couple in a stable while the wife was in labor. As the King of kings entered the world, we saw angels, animals and a murderous greedy thug named Herod. We couldn’t make this stuff up if we tried.

Christ’s birth is the moment of history where God the Father reveals His love through the messenger of His only begotten Son. It is in this moment that the Lord releases the Holy Spirit momentum in leadership through the power of surrender.

The DNA of the Kingdom of God is “conquer through surrender.”

Jesus is the bold leadership plan that comes from this world’s frontlines and brokenness. His birth uncovered the mystery that Paul writes in Colossians 1:27, “To them God would make known what is the glorious riches of this mystery among the nations. It is Christ in you, the hope of glory.”

To fully surrender, we have to ditch our ego and identify what is holding us back from fully submitting to God. I often see three attitudes of surrender:

— I surrender, but I am complaining.

— I surrender, but I have no response.

We can learn so much about surrender from Christ’s birth. On that holy night, some received the magnificent good news and chose to obey. Fear permeated the atmosphere, but they chose the splendor of surrender to the angelic message that the Savior was born.

Luke 1 foretells the birth of Christ, and we see two staunchly different reactions to the Lord’s call for submission through an angelic message. Zechariah doubted the angel of the Lord that his wife would have a son named John in her old age and, as a result, spent nine months in silence! Finally, he surrendered and declared with complete obedience, “His name is John” when they asked him for the child’s name at the birth. After nine months!

The same passage in Luke shares an opposite reaction to the angel of the Lord. Mary courageously declared when an angel told her that she would conceive and give birth to a son named Jesus, “I am the servant of the Lord. May it be unto me according to your word” (Luke 1:38a). And still, we see another submissive heart through Joseph later in our Christ story. His obedience is astonishing given the circumstances. With profound promise, Joseph “did as the angel of the Lord had commanded him” (Matt. 1:24b).

In Luke 2, we see yet another story of surrender to an angelic message from God. The shepherds were moved when hearing, “For unto you is born this day in the City of David a Savior, who is Christ the Lord” (Luke 2:11). The company listened to the message and said to one another, “Let’s go!”

The kingdom of God is most simply understood in the seed. The seed lives to surrender and surrenders to live. Jesus was born to surrender, and He surrendered so that we might live.

In surrender, there is purpose, joy, life, freedom and peace.

Let’s go and live with an abundant joy through the triumph of surrender.

You are beautiful; I see Jesus in you!

Holy Spirit Extends Invitation to Believers to ‘Kick It Up a Notch’
January 12, 2021

The True Meaning Behind the Popular Cry of This Christmas Season!
December 1, 2020