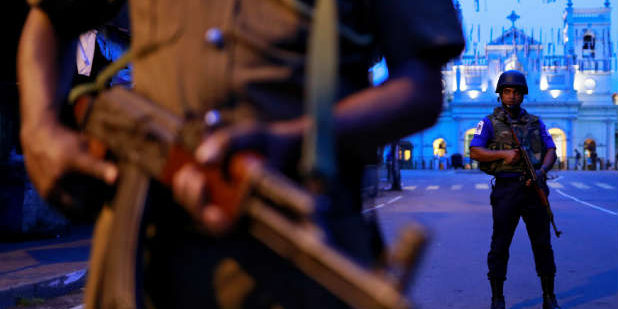 Last Sunday, as Christians in Sri Lanka were celebrating resurrection of our Lord Jesus Christ with believers from around the world, 320 precious saints were massacred. According to NPR’s reporters Matthew Schwartz and Hannah Allam, “Experts have suspected an outside hand in the operation because of the sophistication required to carry out an attack involving multiple suicide bombers deployed to different targets at around the same time.” It is obvious this tragedy was a premeditated attempt to extinguish the flame of God-fearing saints shining their lights boldly in an area of the world dominated by darkness.

This is not merely a matter of extremism in countries far removed from the American border. More and more, Christianity is falsely accused of almost every sort of problem, both in the United States and abroad. And more and more, Christ Himself is being portrayed as a problem, rather than the true answer and solution for all of human beings’ needs, big and small. His unconditional love is labeled as judgment, His grace as an excuse to indulge the flesh.

Instead of embracing and walking in the love of Christ and the grace of His cross, the world of darkness and sin abides by the law of the flesh. This law can be summed up by the law of karma, which misappropriates and misapplies the biblical principle of sowing and reaping. Those who ascribe to this worldly philosophy declare that good intentions and good deeds contribute to good karma, resulting in positive outcomes; conversely, bad intentions and bad deeds contribute to bad karma and negative outcomes. The world proclaims, “Everything will turn out OK if you do more good than bad.” But what they don’t understand is that their actions—even the good ones—are all in vain.

The Word of God declares emphatically, “All have sinned and come short of the glory of God” (Rom. 3:23). Without Christ, even our “good” deeds lead to destruction. Without Christ, we can only reap death, because that is the only result of our sin nature.

Before I had Christ in my life, I was on the road to hell because that was the price for sin. I was lost without God or His Son. In spite of my sin, He still died for me so that I might be reunited with Him because of Christ’s substitutionary sacrifice and resurrection. And through God’s grace, He says I can reap what He sowed. His death made it possible for us to reap everlasting life. You can reap from what you have sowed, which is flesh, curse and death. Or you can reap from what God sowed by surrendering your life to God’s only Son. Which will you choose?

If you have already chosen, what are you doing to help others understand that God’s love and grace are greater than karma? His light is shining even brighter in the darkness of the world today. He wants to shine ever brighter through you. Let your light shine so that men may see your good work and glorify your Father in heaven (see Matt. 5:16).

You are beautiful. I see Jesus in you! Have an awesome week.