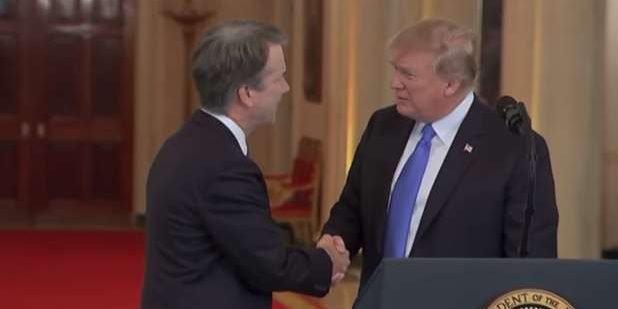 We are in the midst of a historic moment for our country. From the moment that Justice Anthony Kennedy announced his retirement from the Supreme Court, every news broadcast in America has been filled with questions about who his replacement will be. And earlier this week, a candidate has been chosen. The entire nation, it seems, is already choosing sides and making judgments. We must be in constant, intense prayer for God to lead us by His Holy Spirit. Through tears we must cry out for His will on the Supreme Court.

While thinking and praying about this last week, I asked myself, What kind of judge do I want, and what kind of judge does America deserve? This question led me to this unusual thought: Two thousand years ago, the world deserved condemnation, judgment and everlasting destruction, but instead, God gave them—and us—a Savior.

Jesus, the one who had the power to condemn us for our sins, did not come to judge us but rather to save us from our own sin. He said, “You judge according to the flesh. I judge no one. Yet if I do judge, My judgment is true. For I am not alone, but I am with the Father who sent Me” (John 8:15-16). Though He had the right to judge us of our sin, instead He took our sin on Himself. Instead of extending condemnation, He extended grace and mercy to mankind, because He knew “For all have sinned and come short of the glory of God” (Rom. 3:23).

Paul spoke to this when he wrote the book of Romans and penned these words that came right from the heart of God our Father.

This is the Savior we serve, one who not only took our sin on Himself to make us clean but also who intercedes for us at the throne of God. This is the character of the Father, who gave us a Savior when we deserved a judge.

Does our society—in a nation that boasts multiple superstar judges, like Judge Judy, Judge Wapner and Judge Joe Brown, to name a few recognizable figures—really need more judgment than there already is, or do we just need more of the Spirit of the Savior? After all, it’s easy to judge, but it’s better to love.

Now, the Word of the living God talks a lot about judgment, and let me say clearly, God’s judgment is coming. Acts 17:31 tells us, “He has appointed a day on which He will judge the world in righteousness by a Man [Jesus] whom He has appointed, having given assurance of this to all men by raising Him from the dead.”

But until that day, our cry should be, “Let the beauty of Jesus be seen in me!”

Remember, it’s easy to judge, but it’s better to love.